Samsung Galaxy Note 20 series: What we know so far

Samsung is set to debut its highly anticipated Galaxy Note 20 series in their upcoming 'Galaxy Unpacked' event on Aug 5 10 AM ET/7 AM PT. The upcoming Note series from the Korean electronics giant will be the main draw of the event. As per the current Note 10 line-up, there will be at least 2 variants, the Note 20 and the Note 20 Ultra. The higher-end model is likely to be termed as per the S series S20 Ultra. There will be about 5 other gadgets debuted according to various sources, of which the Note 20 series is confirmed to be debuted. The top-end Note 20 Ultra will be shipped with a huge 6.9 inch Dynamic AMOLED QHD display with an aspect ratio of around 20:9. Following the trend from the S20 Ultra, the display will have a refresh rate of up 120Hz, but at a lower resolution of FHD. At QHD the refresh rate will be throttled down to 60Hz, presumably to conserve battery life. The main camera set-up will have at least three lenses. The primary sensor will come with 108MP with an aperture of f/1.8 which will use nonagonal pixel binning to produce a 12MP image. The periscope telephoto lens will have only a 12MP sensor and a hybrid zoom of 50x, down from 48MP and a 100x zoom that came with the S20 Ultra. A 12MP ultra-wide lens will complete the rear camera set-up. However, the phone will feature the 8K recording feature that came with the S20 Ultra. The front camera will be a 10MP punch-hole design, capable of recording up to 4K quality videos. Speaking of the hardware, the processor for the global version would be an improved version of the Exynos 990 chip, while the US version will get a Snapdragon 865 plus chip. The Exynos 990 was inferior in several ways to the Snapdragon 865. The device will ship with either a 12GB RAM 256GB ROM or a 12GB RAM 512GB ROM, while storage can be expanded via a hybrid SIM slot, with support of up to 1TB. The battery will have a capacity of 4500 to 5000mAH which supports up to 45W wired, 15W wireless charging and at least 9W reverse charging, while the charger shipped with the device will have an output of 45W.

The base Note 20 will get a smaller screen of size 6.42 inch. It will lose out on the 108MP sensor, instead may get a 12MP sensor. The periscope telephoto lens may get a 64MP sensor, while the ultra-wide sensor will have 12MP. The storage option will likely be an 8GB RAM coupled with a 128GB ROM. The battery capacity will be around 4100 to 4300mAH which will also support wired charging up to 45W and wireless charging of up to 25W, while a 25W adapter will be included. Both the variants will get Android 10 with a One UI 2.1 skin. Gorilla Glass 7 will be used on both the front and back panels in at least the Note 20 Ultra. Stereo speakers tuned by AKG will come standard on both devices. There will be 5G versions which will be available in the US, UK and other such markets. 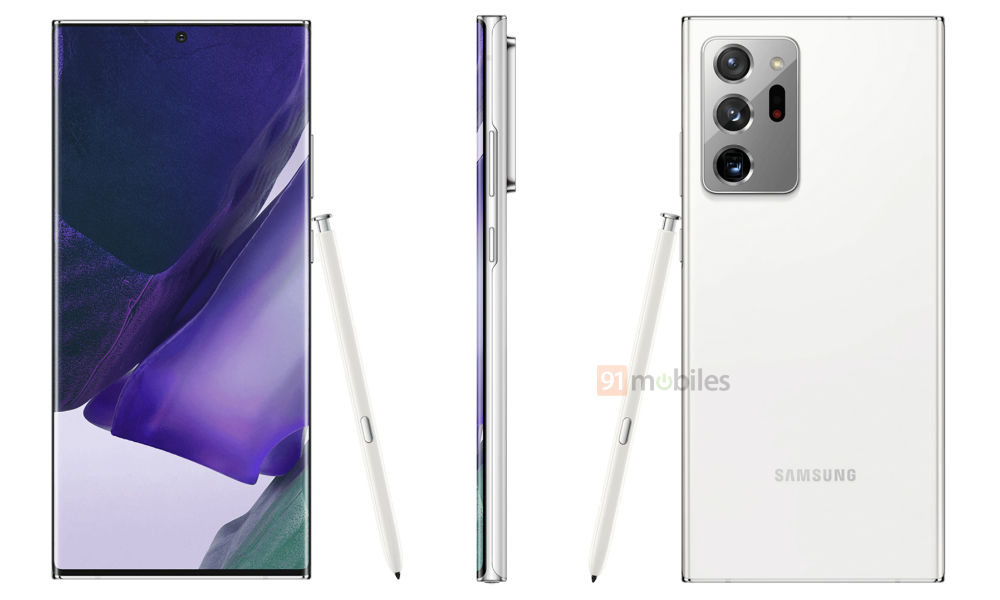 A render of the Note 20 Ultra in Mystic White colour was posted by 91Mobiles on their website which initially surfaced on Twitter by a post from noted Tipster Ishan Agarwal; gives a glimpse of what the Note would look like once released. As per the render, the power and the volume buttons are situated on the right side of the phone. The camera bump is less protruding than the S20 Ultra. Along with Mystic White, the devices will be available in bronze and black colours as well. The Note 20 Ultra will start from a price of USD1399 while the Note 20 will be priced at USD1199.